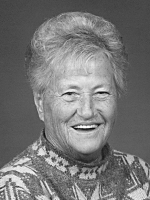 Born in the mountains of Tennessee, Betty Hulse came from very humble beginnings. She and her husband were sharecroppers. In 1953, a close friend urged them to move to Marion, Indiana where the dream of owning a home could be a real possibility.

Once here in Marion, she started bowling in the late ‘50s and traveled statewide to compete. Betty was a top bowler in Grant County for several years. Tuesdays and Thursdays were spent at the local Crest Lanes and JoCo bowling alleys for league nights. JoCo, in fact, for years displayed a 7-foot, 3-inch sailfish that Betty once caught after an hour of reeling.
At the age of 39, Betty was introduced to the game of golf and absolutely loved it. She took lessons, practiced daily, and had an unending dedication to excel. Combined with her skill, Betty’s competitive drive pushed her to the top in the sport. She won multiple club championships and awards including five Grant County titles.

As she aged and entered her 70s, Betty continued to compete due to concern that the Ladies’ Grant County Tournament would be discontinued due to lack of participation. At the age of 77, she competed in her last but 38th consecutive tournament, winning the first flight.

Betty often said that when she was on the golf course, she could turn off all worries or concerns and totally concentrate on the game at hand.
Never one to allow age to hold her back in sports or in life, Betty Hulse earned an accounting degree at the age of 60. She died in Marion in October 2009. ﻿