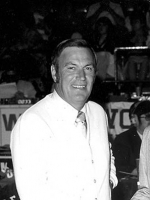 Growing up and living his entire life the Gas City Community, Eugene “Beaner” Linn quickly developed a love for his school system and community. At a young age, Beaner immediately connected with athletics and was a consistent example of toughness, determination, hard work and leadership while possessing an all-around athletic skill set. A 1952 graduate of Mississinewa High School, Beaner ended his athletic career after being a four year standout for the Indians in Football and Basketball.

At the conclusion of his high school graduation, Beaner had numerous offers to continue his athletic career in Football or Basketball ranging from NAIA to NCAA Division I offers. He however elected to transition to a larger role of husband, father and community servant. Beaner wanted to stay home, start a family and support his family initiatives. He however would find a way to continue his passion for athletics in a different capacity, as an IHSAA Official.

Eugene started officiating in 1956 as an IHSAA official serving mostly in basketball, where his true love for athletics lied. He spent over 28 years as an IHSAA official and worked in numerous state final tournaments including the state championship games in 1977 & 1979. Besides the IHSAA, Linn also spent over 7 years officiating major college basketball games. Many individuals that knew him as an official commonly defined him as a tough, consistent official who was like a coach on the floor. Young high school athletes would commonly find Beaner explaining to them why their play was a foul or illegal and how to correct it. He also enjoyed his many colleagues that he officiated with that ultimately became close friends to him. Although he retired from officiating after 28 years, he was commonly still fulfilling his passion for athletics by being involved in the community youth sports as well as the athletics of his children and grandchildren.

Besides his on the court accomplishments as a player and official, Beaner had an alike love for his community in which he served as the Mayor of Gas City for over 34 years. He is the longest consecutive serving Mayor in the State of Indiana in which he passed away in office in 2001 after a battle with cancer. He was married to Janice Linn, his high school sweet heart, and they had five children. Beaner’s legacy has continued to live on through numerous endeavors such as the Linn Family cannon display after every Indians Touchdown on Friday nights as well as the Eugene Linn Memorial Scholarship Fund.