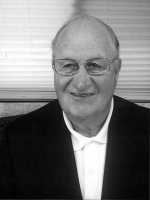 Earl Brown’s father got him interested in playing basketball by putting up basketball goals in the barn. He practiced many hours with his brother Marvin. His basketball success came about in high school after some of his coaches showed interest in his ability. His coach at Sweetser High School, Taylor Hayes taught him fundamental skills and hard work.

He played his freshman and sophomore years at Sweetser High School. After the Oak Hill School Corporation was formed, Earl played there his junior and senior years. He lettered eleven times by participating in basketball, cross country and track. At Oak Hill his varsity basketball coach was Phil McCarter who also taught his teams that always being in shape and working hard on skills in practice was essential for winning games. During his junior and senior years Oak Hill won back-to-back Sectional titles for 1960 and 1961. In high school his achievements were: 1960 Individual Scoring leader for Oak Hill; in 1961; Individual Scoring leader for Oak Hill, Individual leading scorer (608 points), Grant County tourney record (82 points), All-Sectional Team for Basketball, Most rebounds for a single game (25), Most free throws made for Oak Hill (277), and Northern All Star Team. Earl was Oak Hill’s leading scorer for 37 years (1,311 points). In 1997 he was listed as the 11th leading scorer for the Marion Basketball Sectional with 140 points over 8 games. In 2000 he was chosen to be on the All-Century Team for Grant County.

After graduation from Oak Hill, Earl received a scholarship to play basketball for Purdue University. There he was coached by Ray Eddy. While in college he enjoyed working on his defensive and rebounding skills. He graduated from Purdue University in 1966 and went on to teach and coach at Benton Central School Corporation and Maconaquah School Corporation. He coached basketball, football, baseball, and cross country. His baseball team won a sectional.

Earl changed careers in 1971, he started farming. His love of sports still continued as he helped coach several elementary and high school teams as a volunteer. He now is busy attending his four grandsons’ sports activities as well as helping with 4-H projects. Earl and his wife Judy have been married 49 years and have two married daughters, Angie (Danny) Nally and Rhonda (Zebb) Hudson. Earl is active in many church activities.