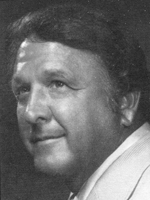 Don Odle spent 38 years as a basketball coach in the state of Indiana, 30 of those years as the head coach of the Taylor Trojans where he also served as athletic director.

At his retirement in 1979 the school named the gym after him, and for the past three decades the Trojans have played in the Odle Gymnasium. One of the many highlights in Odle's career came in 1960 when the Chinese nationalist government invited Odle to coach its basketball team in the Olympic Games. That started a 15 year long odyssey for Odle, that led him to coach the Venture for Victory basketball teams in over 40 countries. For his international coaching efforts, Odle was awarded a medal by the Freedoms Foundation of America.

Odle was also the director of one of the largest basketball camps in the United States with over 35,000 players attending his camps in Upland over the years.

A basketball player himself, Odle led Taylor in scoring for all four years he played for the Trojans and still holds the school baseball one season batting average mark at .523.

Odle has been inducted into six hall of fames. At his retirement in 1979 Governor Otis Bowen declared "Don Odle Day" in Indiana.

Taylor named Odle "Alumnus of the Year" and in 1983 presented him with the university's highest award - "The Legion of Honor". Amazingly, Odle's coaching took him to 100 foreign countries and spanned over 3,000,000 miles in travel.