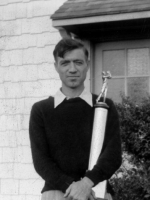 DON  HUMES Marion High School
Don graduated from Marion HS in 1932.  During high school, Don enjoyed bowling and golf.  As a young child, he developed some infections in his leg bones.  It was quite serious.  He recovered and through it all he began walking, to strengthen the bones.  This therapy led him to caddying and learning to play golf.  He began his career playing on the old Marion Golf Club Course near the site where Marion General Hospital is located.    Don lived near the golf course and would go over and practice chipping and putting.  He would caddy for players and would pick up good tips from these men.  He would later win tournaments by beating players he had caddied for at a young age.  At the age of 17, in 1930, he won the Grant County Amateur men’s tournament.  In high school, he was low medalist on the 1st IHSAA boys’ state golf tourney in 1932.  After graduation, he went on to dominate local golf tournaments for the next 3 decades.  His golf swing and attacking style of play was his trademark in the early years of the County Golf Tournaments.  Don captured 12 Grant County Amateur men’s tournament titles.   Don’s last victory was in 1954.  He took some time off, however, returned to play in six more tournaments in the 1960’s and 1970’s.  His final tournament was in 1979.  He was a true ambassador for local golf, participating into his 80’s.  Don Humes was born in Marion in 1912 and died in Marion in 1995.