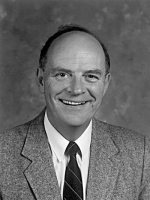 Dick was a 1957 graduate of Marion High School and was outstanding both in the classroom as well as in athletics. He enjoyed an extremely successful athletic career at MHS, earning 3 varsity letters in basketball and 4 in baseball. He played basketball for Hall of Fame Coach Woody Weir; and in his senior year the Giants finished with an overall record of 20 wins and 6 losses. They won the sectional and regional before losing to a tough Noblesville team in the afternoon game of the Fort Wayne semi-state, 57-55. Dick was named to the NCC All-Conference Team in both his junior and senior years.  In 1982 he was named to the Silver Anniversary Team by the Indiana Basketball Hall of Fame as one of the 12 best high school players in Indiana for the year 1957.

Dick was a pitcher for the Giants baseball team and as a senior he helped lead them to their first NCC Championship in the school’s history. He was named to the All-Conference team in both his junior and senior years. He ended his career having pitched the most no-hitters in the school’s history, as well as being the all-time leader in strikeouts. Dick then went on to play baseball for 3 years at Indiana University for legendary coach Ernie Andres.

After graduating from IU in 1962, he returned to Marion to teach and coach. He began his career at Washington Jr. High School, then went on to become the Assistant Basketball Coach under Jack Colescott during the years 1965-1970 when Marion Giant basketball began its return to greatness, including back-to-back state final appearances in ’68 and ’69. Dick also coached the Giants baseball team in the 1960’s and led them to their first state final appearance in 1968.

In 1970, Dick became the Dean of Boys at Marion High School. He later served as Assistant Principal and in 1976 was named Principal of MHS. His ten years spent in that position marked a golden era for the school. At that time, it was one of the largest and most accomplished schools in the State of Indiana with the renowned Richie Walton leading the way in the Arts and the legendary Bill Green leading the Giants to numerous state basketball titles. As a principal, Dick made a tremendously positive impact in the lives of thousands of students, doing it largely on a one-to-one manner, relating to students as individuals. He truly loved kids.

In 2015, Dick was enshrined as a member of the prestigious Marion High School Hall of Distinction. He passed away on June 17, 2016 in Kokomo where he had made his home with his wife, Kay, and his beloved pet, “Murph”, for the past 20 years.