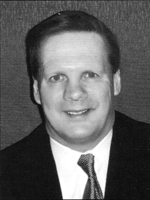 With his long hair flowing and face streaked with sweat as he raced down the court, David Colescott brought new energy and competitive zeal to Marion Giants boys' basketball in the mid-1 970s. Colescott led the Giants to back-to-back state championships in 1975 and 1976 and graduated as one of the state's most honored players.

The son of former Marion coach Jack Colescott, much was expected from David when he first stepped on the Marion Athletic Arena floor for his first varsity game on November 28, 1973. When he was done, David set the school's all-time scoring record of 1,529 points and earned the title of Indiana's Mr. Basketball, the state's top individual award.

Colescott also set school standards for most points in a game (42) and season (694) as well as free throws and assists. He also became the Giants' all-time leading postseason scorer (448) and averaged more than 21 points in 21 state tournament games. Over the years, many of his individual records have been eclipsed. But Marion basketball fans will never forget the flak in which David played the game - or the two state titles he helped deliver. Marion had won just one state title in 1926, and the bitter memory of close state final losses in 1968 and 1969 with his father coaching the Giants remained fresh on the minds of many fans.

Led by Colescott and a talented senior class, the Giants ended their state finals drought with a memorable 28-1 season that also included the school's fourth North Central Conference championship. After surviving a scare from upset-minded Oak Hill in the sectional semifinals, the Giants were seldom challenged in the tournament and defeated small school darling Loogootee in the final game.

A second state title wasn't expected in 1976, but Colescott and an entirely new cast of supporting players pulled out one tight tournament victory after another and defeated Rushville to defend their crown. After the game, David received the Trester Award for mental attitude, and he would join Milan's Bobby Plump as only the second Indiana high school player to win a state title, Mr. Basketball and the Trester Award.