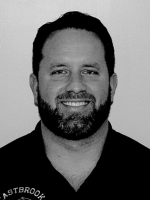 David graduated from Eastbrook High School in 1999. As an outstanding athlete in three sports, David played a huge role in leading Eastbrook to three sectional championships and one regional championship. He is the son of Marilyn and Jerry Caudill. It is easy to see how athletics played an important part of David’s upbringing as his father, Jerry, was also an accomplished athlete.

In basketball, David was a three year letterman. His junior year he started on the Eastbrook team that earned Grant 4 Championship and Sectional Championship honors. The 1997-1998 Panther team holds the school record for the most wins in a season.

In baseball, David was a three year starter as a pitcher, also playing shortstop and third base. He was very instrumental in leading the Panthers to the 1997 Grant 4 Championship and the 1999 Sectional and Regional Championships, leading to the Semi-State Tournament. David led the team in ERA, strikeouts, wins and homeruns.

As for football, David was a 3 year starter at quarterback and linebacker. He led the team to the 1997 sectional championship. He earned honors as the 1998 CIC most valuable back, North All-Star team as a linebacker, Chronicle-Tribune Grant County Football Player of the Year, and Bloomington Harold Top 33 players in the state. Individual statistics include rushing for over 1,000 yards, passing for over 1,500 yards, 20 rushing touchdowns, 20 passing touchdowns, over 80 tackles, 3 fumble recoveries, and 3 interceptions.

After high school, David was recruited as a quarterback by Morehead State University, a NCAA Division I AA college. David was a 3 year starter at quarterback for the Eagles. In 2001 he was named the team’s Most Improved Player. In 2002 and 2003 David earned team MVP honors. He was 2003 Pioneer Football League’s Offensive Player of the Year. He held records in career and single season passing yards, career passing TD’s, and and longest TD pass in school history(98) yards.