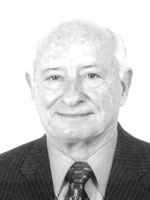 Graduating from Fairmount High School in 1959, Chuck "Poke" Gaither is considered by many to be one of the best all-around athletes to participate in Grant County. Chuck received 14 varsity letters in basketball, baseball, football, and track - thus making him a quadruple threat in the world of sports. He was also ranked 7th academically in his class, was a member of the National Honor Society, chosen as Boy of the Month by the Marion Exchange Club, and was the first two- time winner of Fairmount's Prestigious Don Rhoades Award for Mental Attitude.

In basketball, Chuck scored 1396 career points and twice led Grant County in scoring. As a junior, he tallied 426 points for a 20.1 average. His senior year, he scored 484 points for a 24.2 average. Chuck was also named twice to the Mississinewa Valley All-Conference team and was the league's top scorer.

In football, Chuck scored over 40 career touchdowns and twice led Grant County in scoring and rushing. As a sophomore, he scored 13 touchdowns and 5 extra points for 83 total points. He carried the ball 91 times for 730 yards - slightly over 8 yards a carry. As a senior, he scored 18 touchdowns and 2 extra points. He rushed for 968 yards in 114 carries for 8.6 yards per carry. Gaither also passed for 4 touchdowns. Both years, he was first team All-Conference.

As a shortstop for the Fairmount baseball team, Chuck did not make a single error his junior or senior year. Both years, he led the team in hitting and RBI's. His senior year he hit .480. Chuck had 42 first place finishes in track despite an abbreviated senior season due to injuries. He competed in long jump, relays, and sprints.

As a coach at White's High School for 9 years - coaching basketball, football, and track, he recorded 167 wins. His track team won the 1973 Huntington Sectional Team Championship. The same year, his mile relay team won the Indiana State Mile Relay Championship despite not having a track and having to practice in the road. Also, it is the smallest school ever to win a state relay event. Chuck served as athletic director for 27 years.

Chuck is a graduate of Ball State University and St Francis College, married to his childhood sweetheart Becky, they have three daughters and one granddaughter.