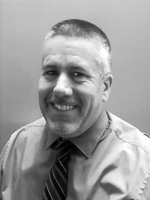 Chris graduated from Bennett High School in 1984 and played five sports his senior year. He currently holds the Grant County record for most varsity letters with 15. He lettered four times in cross country, four in soccer, four in baseball and three in basketball. He was all-conference in all four sports his senior year. Bennett, with an enrollment of a tad over 130, was ranked 17th in the “then” one class basketball state poll his senior year. The Trojans lost to the Marion Giants in the Sectional first-round game by 12 points.

Chris’ claim to fame was the summer of 1983 at the 5-star Basketball Camp in Pennsylvania. His team won the championship and his teammates included Troy Lewis and Danny Ferry. It was coached by John Calipari.

Chris was raised by a single parent, his mother, Carol Oliver. That’s where he learned his work ethic, competitiveness and determination.

Chris went on and played college basketball. He played at Parkland Junior College in Champaign, IL his freshman year, then transferred to Montana Tech in Butte, MT to be re-united with his high school basketball coach, Rick Dessing. Playing three years there, Chris was a senior co-captain and was one game of going to Nationals, losing to Huron, SD, the final game of the district championship, again, by 12 points. The highlight of his senior year was hitting an 18-foot jumper at the buzzer to help win the Frontier Conference Championship. He finished his college basketball career at Montana Tech by being a student assistant coach.

Chris earned a Bachelor of Science degree in Business Finance, and has been in banking since 1989. He is currently the Vice President at locally owned STAR Financial Bank and has been there for 20 years. Chris has been married to Cara for 25 years and they have two sons, Luke,19, and Caleb,16. Chris’ love is now golf, the one sport he didn’t letter in.