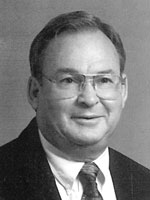 Charlie Fisher brought his love of football to Mississinewa in 1954 coaching for the Indians for 36 years. In that time, he compiled 211 wins, 13 Conference Championships, four Sectionals, and one Regional Championship. To show appreciation for these fine accomplishments, the Mississinewa Football Field is appropriately named "Fisher Field", and the enormous rock beside the Stadium sports a plaque honoring Coach Fisher. Charlie has won more games, and coached longer, than anyone in Mississinewa's history. He was inducted into the Indiana Football Hall of Fame in 2006.

Receiving a football scholarship from Indiana University led Charlie to the Big Ten. After his freshman year he left IU to attend the University of Evansville where he joined the football team and was honored as a member of the Ohio Valley All-Conference Team. Completing his degree at U of E, he signed as a free agent with the Cleveland Browns as a halfback and candidate for a defensive backfield position. Making it to the last cuts, Charlie then made his way to Gas City to begin his career at Mississinewa cutting a path for football into a school known for basketball.

Serving the community for over 50 years, Charlie helped start the Youth Three-Way Recreation Program and is currently serving on the Board of School Trustees. In 2006, Gas City dedicated one day, and declared it, "Charlie Fisher Day" awarding him a key to the city.

Charlie credits the players he coached and his assistant coaches for the many accomplishments the Mississinewa Indians achieved through hours of dedication and hard work. As Charlie says, "One person cannot do this alone". He cared for his players and takes pride in the many who continue to call him "Coach". The relationships he has built are more meaningful than the win/loss records.
﻿