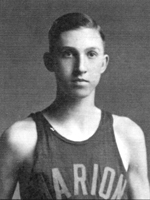 Before there was Bill Russell and Bill Walton, there was Stretch Murphy. In basketball's formative years Murphy was considered the preeminent center of his era. Like Russell, Walton, Wilt Chamberlain and Kareem Abdul-Jabaar, Murphy was credited with redefining the role of the big man and went on to gain induction into the Naismith Basketball Hall of Fame.

Standing 6-7, Murphy was considered a "Giant" for his day. During his junior year at Marion High School, newspaper headline writers began referring to the basketball team as the Giants, a nickname that has stuck for the last 85 years.

Murphy not only gave Marion athletic teams an identity, he led the school to its first IHSAA boys' basketball championship in 1926. At the same time, the seed for the community's passion with Hoosier Hysteria was planted. In the midst of their state title march, with 4,000 fans packing Civic Hall to see Murphy and the Giants, community leaders approved plans to build Memorial Coliseum.

On the court, Murphy blossomed from a gangly sophomore to a dominating all-state center by his senior year. Murphy scored 704 points in three seasons for the Giants and 83 years later ranks among the top 40 scorers in school history.

During their title run, the Giants were seldom challenged and defeated Martinsville in the final game played before 15,000 in the Indianapolis Exposition Center. Martinsville was led by a sophomore guard named John Wooden and, two years later, Wooden and Murphy would team up to make Purdue University a college basketball powerhouse.

In the days before the NBA, Murphy lacked a true stage to continue his brilliant career. Murphy played one season for the regional American Basketball League and several seasons with the independent Indianapolis Kautskys, where he reunited with Wooden, for $50 a game.

While playing professionally, Murphy coached high school basketball at Edinburgh and Winchester high schools. After leaving coaching, Murphy found his niche with the Boys' Clubs of America and was executive director at branches in Bristol, Conn., and Tampa, Fla.

Murphy died in 1992 at age 85, but he's still regarded as one of the state's greatest basketball players.