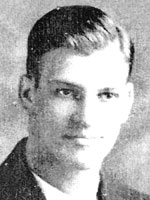 Of all the inductees in the Grant County Sports Hall of Fame, none helped shape a sport the way Charles "Ookie" Miller did when a member of the NFL's Chicago Bears.

The Marion native and former Giants standout athlete was a major participant in the first unofficial NFL Championship game played December 18, 1932, against the Portsmouth (Ohio) Spartans. That game led to major changes in the passing rules and made hash marks the standard on all football fields.

Miller played center and linebacker for the Bears and went on to obtain All- Pro honors. In the early days of pro football, Miller played for little money - $100.00- per game and little of the adulation that is accorded to today's players. Yet he had many great stories to tell in his later years as the oldest surviving member of the Bears' first and second championship teams (1933-34) until his death in 2002.

"We were just playing a game," Miller told Sports Illustrated's Peter King in 1999 of the first championship game, "but a lot of things happened that day to change the course of pro football.

"The Bears of the 1930's coached by the legendary George Halas were considered pro football's first dynasty. Miller's teammates included two other enduring legends, Bronko Nagurski and Red Grange. Miller was a roommate to Grange on the road.

Born November 12, 1909, Miller gained the nickname "Ookie" for his love for cookies. He began playing football on the field located behind McCulloch Middle School and excelled for Giants football teams during the 1924-26 seasons. He was also a member of the Giants' 1926 state championship basketball team.

From Marion, Miller moved on to Purdue University and became an All-Big Ten and All-American center and team captain in his senior year. Purdue was 23-3 with a pair of Big Ten titles from 1929-31, which is the most successful three-year period in school history.

Besides Halas, Miller played for Hall of Fame coaches Paul Brown of the Cleveland Browns and Curley Lambeau of the Green Bay Packers during a seven-year NFL career. Miller was a master storyteller who regaled audiences about his frequent run-ins with Halas and how the miserly Bears coach and owner deducted bandages and doctors visits from the players' paychecks. “It was the depression... I suppose we were all just happy to have a job." Miller said.

After football, Miller settled in Florida with his wife of 47 years, Gertrude, and their three children becoming a sales representative for athletic equipment manufacturers. Miller played golf and handball, and tossed footballs to his two in sons in the backyard.

"l'd say he was a good mix in what you would want in a father," Miller's son Charles Jr. said in the Chicago Tribune obituary of his father's death. "He was strong, but also loving I and caring. He loved football."