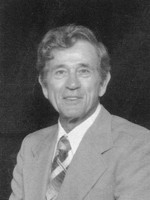 Grant County's most successful golfer, Boyd Toney was a fierce competitor on the course and a courteous gentleman away from it. Toney won a record 12 Chronicle-Tribune Grant County amateur men's titles from 1959-74 and was successful in numerous state and regional tournaments.

Born in 1924 in Forest City, North Carolina, Toney in his youth became a caddy at a course just down the street from his childhood home. From the beginning, Toney constantly studied and practiced on ways to play a better round of golf.

Military service interrupted his golf game and he entered the U.S. Navy in 1943. While stationed in Virginia Beach, Virginia, Toney met his future wife Margaret McGibbon of Swayzee on a blind date. They married in 1945, and settled in Grant County.

At the time Toney arrived, Don Humes was the dominant local golfer, and Humes would capture 11 men's amateur titles. Once Toney broke through with his first win in 1959, he would repeat 11 more times over the next 16 years and surpass Humes' record.

In 1974, Toney won his last title at age 49, and he still was competitive in the tournament well into his 50s. Toney won 69 trophies playing golf, and he played daily in the summers until shortly before his death in 2009.

Toney's gentlemanly nature belied his fiercely competitive fire on the course. Friends and competitors soon discovered Toney strictly enforced the rules of golf no matter if it was a tournament or a casual afternoon round at Elks Country Club, where he was a member.

His wife Margaret survives and they had one daughter, Cheryl (Philbert).