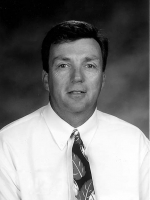 In golf, Bob led MG to an undefeated regular season in 1972. He also earned all-state, all-conference, regional and Grant Four medalist honors. He still holds the school record for lowest score for 18 holes.

In basketball, Bob led MG in scoring and rebounding for two seasons. He was also all-conference and all-county. In tennis, he played number one in singles and doubles.

Bob attended college at Eastern Kentucky University on a golf scholarship. While at EKU, he earned all-conference and team MVP honors. He was also named team captain his senior season. He led EKU to the Ohio Valley Conference championship in 1975.

Bob has been involved in youth sports in Fairmount. He has been the little league and softball commissioner as well as coaching in both leagues.

He coached boys’ elementary basketball for one year and freshman basketball for two years at Mississinewa. He was also the head girls’ golf coach for one season.

In 1983, he started coaching at his alma mater, Madison-Grant. He coached varsity girls’ basketball for five years. His teams won two sectionals and one Grant Four title. The 1986-87 team has the school record for most wins in a season and highest winning percentage. He coached 2014 Grant County HOF inductee Robin Scott.

After being asked to fill-in as a girls’ track coach for one season, Bob coached for ten seasons. He led his team to two Grant Fours and one CIC title. He coached the most successful team in MG history in 1996 when his team went undefeated during the regular season and won the CIC and Grant Four.

He became the varsity volleyball coach at MG in 2006. His teams have won over 85 percent of their matches. They have won two regionals, five sectionals, four Grant Fours, three CIC and three Madison County championships. His 2012 team holds the school record for most wins in a season (34-3) and highest winning percentage. Five players have earned all-state honors under Coach Holloway. Currently, two former players, Hunter Wise and Jessica Hull, are playing NCAA Div. 1 volleyball.

Bob lives near Fairmount with wife Melinda. They have two daughters, Kayla and Allison, and one granddaughter, Zella. He currently is head of the business and technology department and varsity volleyball coach at Madison-Grant High School.