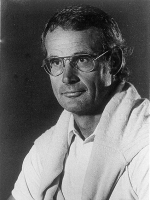 Bob Davenport played fullback in 1953, 1954, and 1955 for the UCLA Bruins. During those three years he scored 25 touchdowns and the Bruins posted a 26-4 record. At UCLA, Bob played for three Pacific Coast Conference Championships. Two of those years he played on New Year’s Day Rose Bowl Game and in 1954 was on the National Championship team. Bob was the first Bruin to earn back-to-back All-American honors in 1954 and 1955.

In 1955 he was the team’s MVP. In the Senior Bowl, played in Honolulu, in which senior All-Americans played against the Pros, Bob was named MVP.

After college Bob was drafted by the Cleveland Browns but decided to play in the Canadian Pro Football League.

Then came a recruiting pitch from Don Odle that brought Davenport to Taylor University in 1958 to become the Trojan’s football coach.

Coach Davenport was at the helm for 11 seasons and ranks as Taylor’s all-time wins leader. He led the Trojans to a conference three-peat championship in 1962, 1963, and 1964.

In 1964 the concept of “Wandering Wheels” was started by Davenport. Incorporated in 1968, long distance bicycle touring is Wheels’ hallmark. 2014 marked the 50th year of the Wheels’ program. They have conducted tours all over the USA and throughout the world. The original purpose was to strengthen young people’s understanding of God’s place in their live’s, building on mom and dad’s input and that of their church.

Bob has received three sports hall of fame honors, UCLA, Long Beach California, and Taylor University. The State of Indiana, the Religious Heritage of America and the American Youth Hostels have bestowed honors on Bob Davenport.