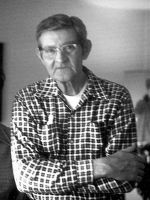 Bob Chapman played on the 1926 Marion Boys’ Basketball State Championship Team that featured Charles “Stretch” Murphy, the 6’3” Chapman and 6’7” Murphy were giants of their day and they were credited with giving the school’s athletic teams their nickname, the Marion Giants.

The two of them led the Giants to a sparkling record of 59 wins against 15 losses in those three years. Following the State Tournament Bob was named to the All-State Team. He was outstanding in the classroom as well, for he was a High Honors student and served as President of the Senior Class.

Following graduation, Bob enrolled at the University of Michigan and was a 3-year starter for the Wolverines. He helped lead them to a Big-Ten Championship in 1929, served as Captain in 1930 and was named to the All-Big Ten Team twice! In 1930, Bob was named the winner of the University’s Top Athlete as well as being recognized as their Top Scholar-Athlete.

Bob eventually returned to Marion where he served on the management team at Anaconda Wire and Cable. In 1975, Bob was invited to the pep rally held at the Bill Green Athletic Arena for the Giants in preparing for the basketball state finals. He gave each player a piece of the net he had cut down in 1926 as a good luck charm.

Then the following year, 1976, Bob was inducted into the Indiana Basketball Hall of Fame. Bob passed away in 1992 at the age of 85.