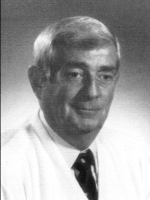 Plain and simple, Bill Green is the greatest coach in the history of Indiana High School basketball.

Other coaches have won more games.

Other coaches have conducted more clinics.

Other coaches have coached more years.

But no one can match Bill Green's six state IHSAA boys' basketball titles.

The mere thought in 1969 that Bill Green would be placed in the Grant County Hall of Fame years later would have been shocking to Marion fans who saw Green's unbeaten Indianapolis Washington team edge the Giants by one point in the state Final Four. But Green returned the favor five times over, leading the Giants to state titles in Marion in 1975, 1976, 1985, 1986, and 1987.

In 1987, Green was named the USA Today National Coach of the Year.

In 16 years coaching the Giants, Green won over 77% of his games, and is the Giants' all-time wins leader with 315 victories.

Green also coached college basketball at the University of Indianapolis. After an outstanding career as a coach, Green authored a book on his match up zone defense and still is a sought after speaker at coaching clinics all over the nation.

An avid golfer, Green found time while coaching the Giants to win the coveted Grant County Amateur golf championship. Now retired in Florida, Green is a member of the Indiana Basketball Hall of Fame.