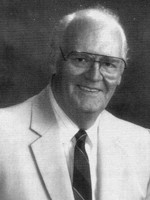 Over a 40 year period no one had a bigger influence over Marion Giants basketball than Bill Fowler. Fowler first arrived on the scene when he led the Giants to the 1940 North Central Conference basketball title. It was the first of many Indiana All Stars from Marion High School. His basketball talents earned him a trip to Kentucky to play basketball for the legendary coach Adolph Rupp. Fowler's career was cut short by World War II, but after a stint in the Coast Guard, Fowler returned to Marion and became the long time voice of the Marion Giants.

Starting in 1947 Fowler became a legend around the state for his broadcasting of Giants basketball on WBAT Radio. His classic lines such as "Cold as a night watchman's lunch" and "Clean as a hound dog's tooth" made him a staple on everyone's radio dial.

After broadcasting many near misses, Fowler called the Marion back to back state titles in 1975 and 1976 and then, stating it couldn't get any better, retired as the "Voice of the Giants." Bill had many chances to move on to bigger markets but chose to remain in his beloved home town.

Bigger than life, Fowler emceed nearly every major sporting activity in Marion and Grant County and was instrumental in helping the Skating Seybolds raise the needed funds to skate in the 1988 Winter Olympics.

Above all Fowler's biggest contribution to Marion Giants Basketball may have come while he was president of the Marion School Board. Fowler led the charge to build the state of the art Marion Athletic Arena which brought both the sectional and regional to Marion starting in the early 70's. Playing in that "House of Thrills" the Giants did not lose a sectional or regional game from 1975 to 1987, still an all time state record.

Fowler was also a prime mover in the late 1980's in getting the building he helped build, to be renamed the Bill Green Athletic Arena.

The press box in which Bill Fowler broadcast hundreds of games was left as part of the refurbished Grant County YMCA, and those who play ball in the gym swear they can still hear Bill say, "Giants win, Giants win."