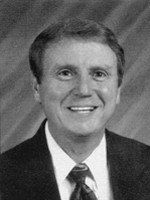 A state champion coach, mentor to many standout players, and still a successful player in his own right, Bill Beekman has enjoyed a long and varied career on the local tennis courts.

Beekman coached the Marion High School boys' team from 1970-95 and the girls' team from 1984-99 and compiled a 603-147 combined record (80.4 winning percentage). In 1991 he guided the boys to the state championship, the first team since 1975 from outside the Indianapolis area to win the title.

Yet, Beekman got a late start on his tennis career. With the encouragement of then Giants coach Jules Walker, Beekman tried out for the team as a senior and advanced to the No. 5 singles position. He won the team's Mental Attitude Award.

Beekman played intramural tennis at Marion College (now Indiana Wesleyan University) in the days before the school had an intercollegiate athletic program and was the No. 1 singles player and most valuable player. At age 23, Beekman became the Giants boys' coach.

A three-time Indiana Coach of the Year, Beekman was inducted into the Indiana High School Tennis Hall of Fame in 1995.

Beekman met his wife, Jan, on a tennis court, and their daughter Julie was an all-state tennis player for the Giants. Bill and Julie are ranked 15th nationally in senior father-daughter mixed doubles, and Bill currently is No. 2 in 55-and-over regional men's singles.