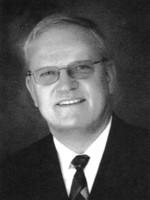 Bill Atkinson is one of the most outstanding all-around high school athletes in Grant County history. He graduated from Mississinewa High School in 1971 after a glittering career which began as a freshman. Atkinson earned 14 varsity letters over a four-year period. He starred or contributed heavily in four sports. He received four letters in track, football and baseball along with two in basketball. He ranked 17th academically in his class of 150 students. Atkinson scored 340 points in his football career while averaging 8.4 yards per carry and 171 yards rushing per game. One football game that truly stands out was against Winchester when he scored 46 points. He had seven touchdowns and a pair of two-point conversions. He also intercepted six passes in the same game as he starred on both sides of the ball.

Atkinson was hitting .367 and was an outstanding shortstop when he got injured and had to miss the 1971 Anderson Regional baseball tournament. The Indians got to the regional finals before losing. Atkinson suffered a leg injury in the Eastbrook Sectional finals but returned to play in the 1971 Indiana North-South All-Star Football Game.

He got impressive quotes from many people. One of them was, "He's the most outstanding all-around athlete from the Marion and Grant County area." Another quote "He's a youngster certain to be an asset to any program, athletic or otherwise. We only wish every athlete was of his caliber."

Atkinson played three Big Ten varsity football seasons at Indiana University. He was both co-captain and the team's most valuable defensive back his senior year. The great Quinn Buckner was one of his teammates in the IU secondary at one time. Atkinson received a full-ride scholarship to Indiana. John Pont, then the IU football coach, had this to say about Atkinson when he notified the Hoosiers that he was coming to Bloomington: "Bill is the kind of athlete we are looking for with his hustle, speed and quickness. Too, he's an academic honor student." After college, he was a high school head football coach two years and then had some real good teams as a head girls' high school basketball coach. He spent his entire 16- year girls' basketball coaching career at Edgewood High School. Some of his teams won sectional and regional championships.

Atkinson was a classroom teacher 20 years and now is in his 14th year as an administrative assistant.