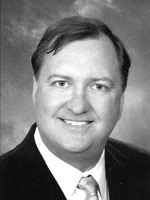 Ben Burnau's baseball career started as a batboy for his brother's little league team. From that time on, he felt at home on a baseball diamond. He spent as much time as he could playing the game he loved whether it was an organized team or just a neighborhood pick-up game. Baseball has provided Ben with many memories and opportunities.

The 1984 Marion Giant baseball season was the most memorable for Ben. During his senior year he threw a no-hitter while setting a school record 17 strikeouts. He followed that outing with a one-hit, 17 strikeout game. Ben was instrumental in leading the Marion Giants baseball team to the 1984 State Championship title. In the Semi-State, he struck out 12 batters in a 2-1 win. In the opening game of the State Finals he threw a 2-hit shutout to propel the Giants to the Championship game. He also pitched the final two innings in relief in the State Championship game to record the save. For his senior year he had a 13-2 record with 166 strikeouts in 91.2 innings, an ERA of 0.68, and was named team Co- MVP. Ben was named to the All NCC Team, Sports Hotline All County Team, Indiana High School Baseball Coaches All State Team, and played in the North-South All Star game.

Ben went on to play a very successful collegiate career at Miami University. He holds Miami's career records for pitching wins with 30 and strikeouts with 295. Throwing 350.1 innings for the Red and White from 1985-88, he finished his Miami career as the school, and the Mid- American Conference record holder in innings pitched. His career wins and strikeout records still rank him fourth all-time among MAC leaders. As a senior in 1988, Ben set a Miami single-season record for wins with 11. He earned first-team All MAC distinction in 1988. He was inducted into Miami University's Hall of Fame in 2009.

Following his Miami career, Ben was drafted by the Seattle Mariners organization. He played two seasons in the minors before retiring in 1990.

Ben's love for baseball evolved to coaching his daughter in softball. Ben lives in Aiken,SC with his wife Katy and daughter Caroline.