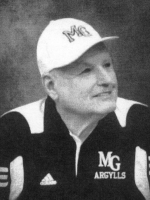 Arlen Thomas Hasty, 77 of Fairmount died on Friday February 9, 2018 at Community Hospital, Anderson, Indiana after a brief illness. Known to many in the Fairmount area as Mr. Madison-Grant, he was an avid sports fan but especially Madison-Grant Junior and Senior High sports. He followed the teams wherever they were playing and would attend most of their sporting events. He could tell you the achievements of most of the talented athletes from Grant County. He was a member of the committee for the Grant County Sports Hall of Fame since its inception in 2008. He was a former school board member for the Madison-Grant School Corporation.

Arlen was a graduate of Fairmount High School class of 1958 and in his early years attended the Little Ridge Friends Church. He was a farmer and former owner of the Hasty Farm Implement Company, Fairmount, IN an IH Case dealership. He was the son of the late Palmer Hasty and Orpha (Druck) Hasty, born February 10, 1940 at Marion, Indiana.