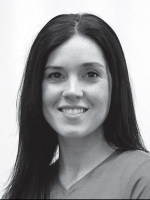 Amie’s love for basketball began in 5th grade when she started attending Lakeview Christian Schools. She was introduced to the game through her friend and teammate Kristen (Whitton) Weig and and began playing AAU basketball for Coach Steve Burkhart, who was instrumental in teaching her the fundamentals of the game. From then on, Amie was determined to hone her skills and spend countless hours in the gym practicing and competing.

At Lakeview, Amie’s game was greatly influenced by Coach Greg Whitton who coached her through her junior high and high school career. During four years as a starter, the Lakeview Christian High School girls’ team went 70-22. Amie helped lead her team to three sectional championships and two regional championships. As a freshman, Amie’s team won the first sectional game in LCHS history, beating Eastbrook on their court.In addition, LCHS girls’ basketball team defeated every Grant County School, including LCHS’s first victory over the Marion Giants in any team sport. As a senior, Amie was named the Chronicle Tribune Player of the Year and participated in the Top 40 Workout. She was invited to participate in the North-South All Star game. Amie graduated LCHS with 2,076 career points and is currently the leading scorer in Grant County and 18th all-time scorer in the State of Indiana. Amie’s dedication to excellence was not limited to the basketball court, as she graduated Valedictorian of her LCHS Class of 2000.

Although recruited by many NCAA and NAIA schools, Amie chose to stay close to home attending Indiana Wesleyan University playing for current coach, Steve Brooks. Winning three Conference Championships and one NCCAA National Championship, Amie was instrumental in her team's two trips to the NAIA National Tournament, including the first ever in IWU Women’s Basketball history in 2002-03.In her IWU career, Amie scored over 1000 points and was selected as NAIA and NCCAA Academic All-American carrying a 3.9 GPA in Nursing.

﻿After several years working as a Registered Nurse in various roles and earning a Master’s of Nursing (MSN) in Nursing Administration from IUPUI, Amie is now enjoying her role as a stay-at-home mom with her four children. Amie and her husband, Ryan, reside in Gas City.