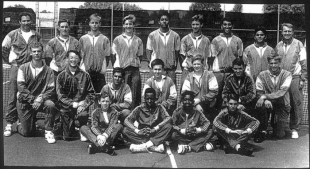 The Indianapolis area had long dominated boys’ high school tennis, which makes Marion’s State Championship in 1991 all the more remarkable.

Marion finished 26-1 and the only loss was 3-2 against No.1 ranked North Central in the first meet of the regular season. In the state finals the Giants defeated Center Grove 3-2 in a semifinal three-hour meet, and with little rest defeated Carmel 3-2 for the title.

Jim Bove was at No.1 singles, Prasad Krishnamurthy at No.2 singles, Robert Rhamy at No.3 singles, at No.1 doubles were Paul Singh and Shelby Bowen and at No.2 doubles were Marty Harker with Nitin Gupte or Manish Patel. The three alternates on the tournament roster were Andy Sciaudone, Ryan Williams and David Devine.

The Giants were coached by Bill Beekman and Asst’ Mark Redeen.