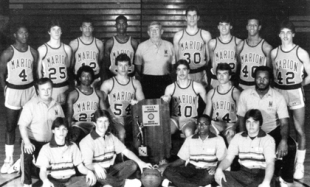 6,000 season ticket holders.Thousands of fans following the Giants on the road.Every game on local radio, all home games on local TV, and maybe the most fitting tribute of all was that five starters in 1987 were named to the Indiana All-Star basketball team. During the three-year state title run Marion won 85 games and lost 4. They won 40 games in a row at one time and in 1985 became one of six single class state champs to finish the season undefeated. The Giants went 21-0 in the North Central Conference during the Dream Team era and tied a record by winning three consecutive NCC titles.

The coach of the Giants, Bill Green, was named USA Today High School Coach of the Year in 1987 and the Giants finished second in the USA Today national poll that same season.