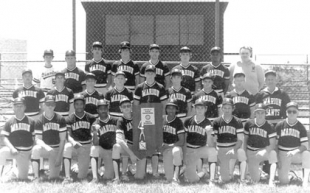 The pre-season expectations for the '84 Baseball Giants were high after finishing 22-10 and sharing the NCC Conference Championship in 1983 with a roster of underclassmen. The '84 Indiana Coaches pre season poll had the Giants ranked #5 in the state. Head Coach Mel Wysong, in his 3rd season at the helm, had his Giants ready for the season, getting off to a very impressive start. However, the team hit a slump midway through their schedule losing back-to back games to County rivals Oak Hill and Mississinewa.

After an intense locker room meeting, and a few individual sessions with seniors, Coach Wysong refocused his team and the season turned around for the Giants. They won 21 of their next 25 games, including 9 wins in post-season play capping the season as State Champions. The Giants combined strong pitching, led by Ben Burnau and Steve Huffman, excellent team defense, and timely hitting by Tony Thompson, Joe Johnson, Scott McKinney, Ben Burnau, Dave Sherman, David Grandee, and Andy Cassidy. It was a team effort. Following the championship game, Glenn Petroff was presented the coveted L.V. Phillips Award for Mental Attitude.