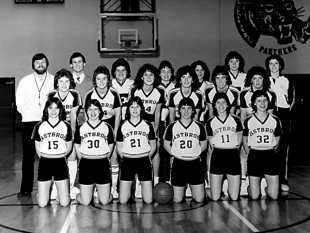 The 83-84 Panthers became the first girls’ team voted into the Grant County Sports Hall of Fame. They were an over-powering team that averaged 69.7 points and gave up 38.9 during that season and were the state’s No. 2-ranked team according to the Associated Press.

Led by Janna Bragg and Dawn Davenport, the Panthers won 26 of 27 games and advanced to the IHSAA state finals, losing a 56-50 decision to eventual state champion Crown Point in the semifinals.

Bragg was a gifted offensive player who averaged 22.8 points her senior year and scored 1,578 points in her career. The 6-foot-1 Davenport was a double-double machine who racked up 21.7 points and 15.4 rebounds her senior year and for her career went over both 1,000 points and 1,000 rebounds. They arguably were the best girls’ inside-outside duo in the state that year. Davenport and Bragg were named to the Associated Press five girl All-State first team and both girls were named to the Indiana All-Stars.

Rounding out the starting lineup were point guard Kathy Castillo, forward Sandy Worrick, and guard Chris Neideck, the only non-senior.

This was before class basketball, the 3-point shot and they were using regulation-size basketballs instead of the girls’ basketballs they use today.

(A reprint from the Chronicle-Tribune)