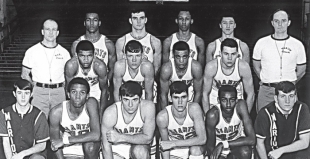 Marion High School boasts seven boys’ basketball state championships, one behind alltime leader Muncie Central. Yet,the 1968-69 Giants who lost a controversial state finals game to George McGinnis-led Indianapolis Washington are arguably the greatest of them all. No less an authority than Mike Lopresti, former Richmond Palladium-Item and USA Today sportswriter, considers the ’68-69 Giants the finest team to play in the North Central Conference, which has produced 25 boys’ basketball state champions. Marion won 28 straight games by a 15-point average until running into Washington in the state semifinals at Butler Fieldhouse.

The Jack Colescott-coached Giants had been to state in 1968 and lost a heart breaker to Indianapolis Shortridge in the semifinal round on Oscar Evans’ late basket. Four starters returned for the ’69 season:Joe Sutter, Jovon Price, Jerry Townsend, and Brent Myers. Dan Gunn arrived from Thorntown and completed a well-balanced lineup.The 1968-1969 Marion Giants Boys Basketball possessing size with a 6-foot-seven Sutter and Myers, a quick guard in Townsend, and a long, athletic defensive whiz in Price, the Giants were an ideal combination of power and finesse. Sutter and Gunn also brought exceptional outside shooting and passing ability. Marion made it through the regular season unbeaten and ranked No.2 in the state after briefly holding the top spot. They finished 7-0 in the NCC and won the championship for the third time.

In almost any other year, the Giants would have been a prohibitive favorite to win the title. Washington, though, featured future pro standout McGinnis and Steve Downing, a future Big Ten MVP at Indiana University, and many historians rank the Colonials as Indiana’s all-time greatest high school team.
﻿
But Marion had Washington, coached by future Giants coach Bill Green, on the ropes and led by 12 points early in the fourth quarter. In one of the most controversial games in state tourney history, the Colonials rallied to take the lead in the final minute and hold on for a 61-60 victory on their way to the state title that evening. A malfunctioning game clock kept players and coaches guessing about how much time was left in the game. Most of the reporters on press row had Downing playing with six fouls, and a lane violation wiped out a Marion free throw in the waning minutes.

Three players went on to play NCAA Division I basketball: Sutter (Davidson), Price (Purdue), and Gunn (Mississippi). Myers played football at Purdue and was drafted by the NFL’s Oakland Raiders.Townsend played basketball at Central State (Ohio). Price and Sutter also played professionally in Europe and were inducted into the Grant County Hall of Fame in 2011 and 2012, respectfully. Colescott is a charter member of the Hall of Fame. Other key members of the ’69 Giants were John Chin and Ned Rencher. Rounding out the team was Avis Stewart, Don Pettiford, Jerry Scroggins, Larry Richardson, Greg Oradat, and David Johnson.