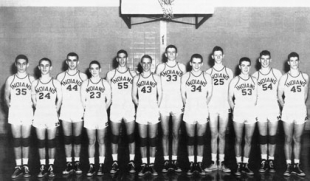 The 1954 Indians have stood the test of time as one of Grant County's all-time greatest boys' basketball teams. Coach John Fredenberger and assistant Joe Smalley assembled an incredibly well-balanced team that went through the regular season unbeaten and didn't lose until it played No. 1-ranked Muncie Central in the Fort Wayne Semistate championship game.

Although Larry Hedden was the centerpiece, the Indians also featured gifted shooter Dick Smith and Martin Burdette, a rebounding and defensive stalwart. Bob Roark and Larry Atkinson completed the starting lineup, and Bob Mitchell was a standout sixth man.

Hedden and Smith were the only returning starters from the Indians' outstanding 1953 team that went 24-2 and won the Marion Sectional. Mississinewa opened the season with a victory over Middletown, the only team to defeat the Indians in '53, and then racked up 20 more wins in a row - most by lopsided scores.
﻿
The Indians won the Grant County tournament and Mississinewa Valley Conference championship. After repeating as Marion Sectional champions, they defeated Bluffton and Hartford City to capture what is still the school's only regional boys' basketball title.
﻿
Kokomo of the powerful North Central Conference fell to the Indians 66-55 in the semistate semifinals. That evening, the Indians led Muncie Central, the 1951 and '52 state champs, into the third quarter before wearing down and dropping a 63-48 decision to the Bearcats. A week later, Muncie Central lost to Milan in a legendary state championship game.

Hedden made the Indiana All-Star team, and Burdette was an alternate who played in the second game of the annual series against Kentucky. Both went on to play for Division I colleges, Hedden at Michigan State and Burdette at Miami (Fla.).
﻿
The Indians finished 27-2 and 56 years later remain the last team from Mississinewa to win a boys' basketball sectional championship.