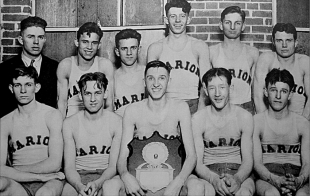 The Marion Giants won over Martinsville, 30-23 in the State Championship in 1926. Both Marion and Martinsville had been in the Final 16 the year before. A Marion newspaper writer, Bern M. Boxell, picked Kokomo to win the 1926 State Championship. The Giants players were not impressed and beat Kokomo in the Kokomo regional, 24-8. The Giants closed out the 1926 season with 15 straight wins. Head Coach Gene Thomas led the Giants to a 27-2 overall record in 1926 and coached both the basketball and football Giants for 5 seasons. The Giants were led by Charles “Stretch” Murphy and Bob Chapman. Both were inducted into the Indiana Basketball Hall of Fame. Murphy was inducted in the inaugural class of the Grant County Sports Hall of Fame class of 2009. Chapman received that same honor in 2015. This was the first official state championship for Marion High School and prompted the building of the Marion Coliseum as the place the Giants would play their home games until the construction of the Bill Green Athletic Arena in 1970. One of the great contributions the 1926 basketball team gave Marion High School was the nickname “Giants”. This was due to the height of Bob Chapman and Charles Murphy. Bob was 6’3” and Stretch Murphy 6’7”. In 1926 being six feet tall was extraordinary and Marion had two players way over six feet. A state sportswriter penned the name “The Marion Giants”. The nickname from that time on was adopted as the Marion High School official nickname and mascot.

Gene Thomas coached the Marion Giant basketball team from 1923-1928 and won the State Basketball Championship in 1926. He then went to Kalamazoo Central High School, in Michigan, where he served as Principal, football and basketball coach from 1928-1965. He won the Michigan Basketball State Championship in 1932 and 1939. He is the only coach to win state Titles in Indiana and Michigan. He was a 4-sport, 10-letter winner; 2 in baseball, 2 in track, 3 in football, and 3 in basketball at IU. He received the Gimbel Medal as a Senior. He graduated from IU in 1923. In 1926 he served as President of the Nat. Assoc. of Secondary Principal in 1962. He died at the age of 70 in 1970.